If you can cast your mind back to when I wrote this Rimworld review on Ludeon Studios’ Survival sim, Rimworld you might remember I was pretty keen on it. You probably all think that this is now covered in a fairly thick layer of virtual dust, not being touched for months. Well you’d be wrong. It’s now over 18 months later, and I am still playing it.

If you haven’t already downloaded and played it, then maybe you need a bit of encouragement. Read on to find out all the good reasons why Rimworld is worth another go, or a purchase if you’ve never played it.

Every Game is Different

Each game you play will be different from the last. The chance of randomly generating the same characters in the same location with exactly the same events happening is zero. So, you never truly know what to expect in your game. Add into all this random generation, the changes in difficulty and the different AI storytellers, and you have a game that is constantly surprising and entertaining, though at times pleasantly frustrating as well.

It’s All About the Stories

Rimworld, without even trying, creates stories around the randomly generated characters and events it generates. Of course the game doesn’t openly provide these stories, but my mind is more than happy to fill in the blanks. An example of this is the story of poor Miriam.

“Miriam, a 79-year-old botanist on the run from pirates, seeks sanctuary within our colony. The colony takes down the pirates and she is soon brought into the fold as another diligent worker. What we didn’t know is that she had a Smokeweed addiction, so severe that days after she joined she quickly dropped unconscious as her body desperately tried to get clean.

Weeks went past and she remained unconscious in her bed, until finally the addiction passed and she was clean again. That was until a chance encounter with Ambrosia, gave her the taste for something better. A mental break brought on by a mild heart attack saw her rampaging through the fridges eating all the Ambrosia she could, until she was heavily addicted again. Only time will tell, if she can fight off this addiction like the last one.  Will Miriam have a happy ending or will her addictive personality cause her more issues.”

Sure the game only provides the string of events, but the stories write themselves.

Ludeon Studios are constantly tweaking and making additions to the Early Access version.  Around 5 months ago they released Beta patch 18, which among a crap-load of other things brought in more different types of mental break, more biomes and a few more incidents to test the survival skills of your settlers. There showing no signs of stopping either. Ludeon Studios are seemingly completely happy to keep Rimworld in Early Access until they are happy it’s as good as it can be. You know what? I’m very happy with that. 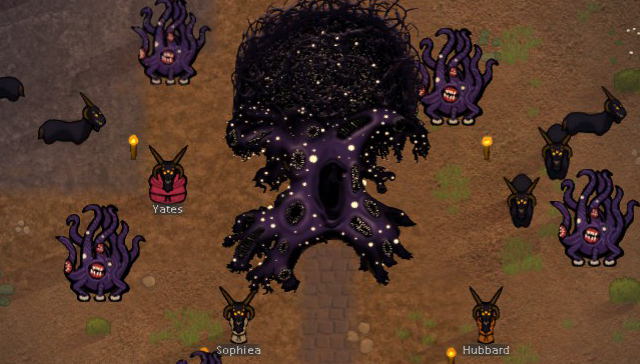 Rimworld has a great modding community. If you’re not happy with the vanilla version of Rimworld, then you can download a whole host of mods, to tweak certain aspects or completely overhaul the game.  Want to fine tune your pawns before the game starts, there’s a mod for that. Want to add completely new races or add some more pre-built scenarios into your game. Well duh! There are mods for that too. If ever the game was going to get stale, there are enough mods out there to keep you going.

Rimworld is not an intensive game, and can be played on even the lowest spec computer. I can play it on my Windows 7 laptop, which struggles on most games even on the lowest graphics setting.  This is due to its simplistic yet effective graphical style that Rimworld has. The basic top down map and icon based gameplay screen, means no slowdown even when your thriving colony takes up the screen.

Pack Up and Move On

Even when your colony is as large as it could be, the game still gives you the option of even more play, by allowing you to pack everything up and move out to an entirely new area, and start building again with your entire complement of colonists, and the increase in experience. Not that it would necessarily be any easier of course.

In the same vein as Minecraft, it’s not always about function over aesthetics. There’s time to experience your creative side in Rimworld. Carve out rude words in mountains or grow your crops in an Escher like pattern.

So there you have my list of just why you need to be playing Rimworld. Have you played it? Want to share what you think, or any great stories about your colonists? Let us know in the comments.